Created in the 1950s in the Japanese Toyota factories, Lean has established itself as an efficient, friendly approach to production management aimed at reducing waste while ensuring continuous improvement.

Initially designed for industry, Lean is eminently applicable in a variety of fields – for example, one might speak of Lean Management, Lean Startup or Lean IT, depending on the field of application. More recent frameworks, such as Scrum (which originated in Agility, another movement that emerged alongside Lean), are now directly and explicitly linked to Lean. This exposure to new horizons enables us to devise new uses for the various Lean tools and practices, including Kanban, Mudas, Kaizen and 5S work sites. In this article, we’ll focus on the latter (5S projects), and specifically on how I used it to manage a Product Backlog in a Scrum context… but first, let’s take a look back at the origins of its adoption in industry.

5S as a Lean tool and in industry

5S is a Lean tool used mainly in the industrial environment, and more particularly as a way of organising shops and workshops. For example, 5S can be used to organise consumables (screws, sensors, motors, etc.) in a way that is clear to everyone.

Lean describes 5S as a method of improvement; it aims above all to reduce waste, particularly in terms of time wasted, by simplifying everything that can be simplified and removing the unnecessary.

Like many Lean tools, the terms have Japanese names. 5S consists of 5 steps to be performed in sequence, in the following order:

5S is also known in French by the acronym ORDRE:

What if I told you that you’re most likely applying 5S principles naturally and daily at home without even realizing it?

Don’t you see how?

Maybe if I asked you how you organise your food or dishes? For example, I’m sure forks have a specific place in your home, as do plates, glasses, knives, etc. You have identified specific storage spaces for each of these items, and if a spoon accidentally ends up where the forks live, you think something has gone wrong, and you’ll probably put it right fairly quickly. Similarly, you wouldn’t put a dirty fork away among the clean ones.

Think about this the next time you put away your cutlery and crockery; look at each thing you do, and try to link it to each of the 5S steps.

Managing a Product Backlog with 5S

5S is fully applicable to managing a backlog, or to reorganising it when management has failed. I personally introduced 5S in my professional sphere to achieve this goal. The most recent time I used it was on a backlog consisting of more than a hundred items, not all of which were defined according to the same nomenclature, with or without descriptions and containing obsolete or important tasks… the operation required the input of a good part of the team and took a whole day.

Obviously, before you try something similar yourself, I’d advise you to bear in mind that it’s really not a great idea to start 5S from scratch on a regular basis, and that you need discipline to keep the system in perfect working order. So it’s important to ensure that the people concerned understand that this process is costly and painful, but becomes irrevocably necessary once the disorder has been allowed to develop.

In short, this is the strategy used, hand in hand with 5S, to effectively impose order on a backlog:

Why isn’t our 5S working?

It often happens that the application of 5S lasts only for a short time before we return to our good old disorder: because chaos leads to chaos, it only takes one small exception to the rule and all the good work of 5S can be destroyed in a few moments. For example, the small User Story that doesn’t get properly filed in the Backlog, because we say we’ll do it “later”… and unfortunately, this means it will never get filed because, as Leblanc’s law stipulates, “later” means “never”.

This most often happens because the 5S process has not been completed. Following the fourth step of standardisation (Seiketsu), many people will stop there and say that they finally have a tidy, practical backlog or workshop to use, ignoring the step that I think is the most important: Shitsuke, or education (self-discipline) about working practices. Because this stage is neglected, for reasons of budgetary constraint or because it is not considered necessary, it inevitably leads to the return of disorder (a User Story that is not placed in the Backlog, followed by a second one because there was already one there, etc.). Note the following regarding the Backlog (as an analogy with Agile frameworks): Scrum requires a Product Owner, which greatly facilitates the last and most difficult stage of 5S, since the Product Owner is the only one who takes action on the Backlog and therefore ensures that 5S is applied. Remember, however, that Scrum requires that the content of the Product Backlog must be publicised sufficiently clearly to all concerned (Scrum team, but also stakeholders), so it is important to ensure that, despite the fact the Product Owner bears sole responsibility for the management of the Product Backlog, the standardisation of the backlog is still the result of a shared process based on collective intelligence. 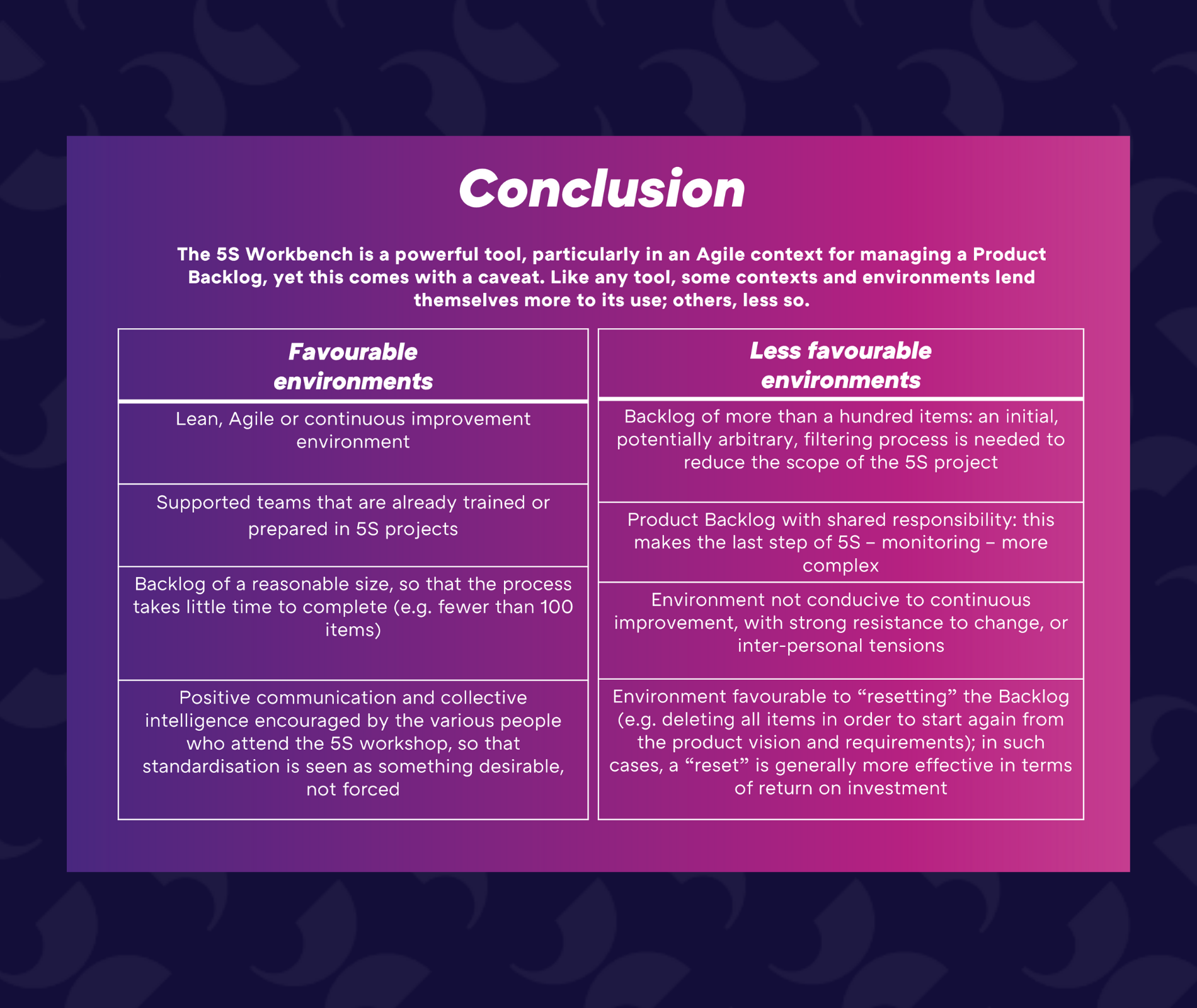